isometries of the plane

Below we'll focus on the groups G  of isometries without translations (rosette) or whose translations built a normal sub-group TG  generated over ℤ by one element (frieze) or two independent elements (wallpaper). The lattice  is the orbit of the origin under TG  (set of images of the origin by the translations); it is symmetric with respect to the origin.
For any isometry f of G  we define the reduced isometry γ  with the origin as fixed point by
if f(z)=az+b, then γ(z)=az,   and else f(z)=az+b, then γ(z)=az.
These reduced isometries  preserve the lattice  and form the reduced group ΓG  isomorph to the quotient group G/TG.

A rosette group R  doesn't contain any translation (and thus no glide reflection):  TR ={id}.  Its lattice is reduced to the origin.
It is isomorphic to a cyclic or a dihedral group (examples: n=5).

A frieze group F  contains a sub-group of translations generated by one translation:  TF =<t>=ℤ•t.  Its lattice is a set of points regularly spaced on a line Δ, and the reduced group ΓF  is a sub-group of the Klein's group {id,-id,m,μ} where Δ is the axis of μ.
•   Crystallographic notation:  fxy  where f means "frieze",  x=1,m  without/with vertical mirror reflections,  y=1,m,g,2  no other symmetry, a pure (m) or glide (g) reflection with an horizontal  axis, half turns (order 2 rotations r).
•   Orbifold notation (J.H. Conway): ∞ for an "infinite rotational symmetry around a line", 2 for a set of half-turns (the half-turns after * have their centers on intersections of reflection axes) and x for a glide reflection.
•   Notation of L. Fejes Tóth: Fnp
•   The names given by John Conway to these moves.

A wallpaper group W  contains a sub-group of translations generated by two independent translations:  TW =<t1,t2>=ℤ•t1+ℤ•t2.
The reduced group ΓW  is finite with maximum order 12 and only the rotations of orders 2, 3 ,4 and 6 preserve the lattice.
The possible reduced groups  are thus the dihedral groups D6 and D4 and their sub-groups.
Important!  To a rotation of ΓW  corresponds, in W , a family of rotations of same order; to a reflection of ΓW  corresponds a family of reflections (whether all pure or whether all glide or whether both alternated) with parallel axes.

•   Crystallographic notation: p or c for the lattice (primitive or centered) and 1,m,g,n as for the frieze groups (rotation rn f highest order).
•   Orbifold notation(J.H. Conway): integer n for a set of rn rotations, * for a set of reflections, x for glide reflections (the half-turns after * have their centers on intersections of reflection axes).
•   Notation of L. Fejes Tóth: Wnp

The key role played by the "fixed lines for W " associated to the axes of the reflections of the reduced group ΓW, and thus by the families of reflections in W,  suggests a more simple and concise and more explicit notation (last two lines of the table above): p, g and a for each family of reflections (pure, glide, alternate), cn for the highest rotation's order n of the groups without reflections (if there are reflections n is the number of families, namely the sum of the exponents); we may add a sign - or + to specify that there are no rotations or rotations not centered on a reflection axis.

The name of each group ("pga" notation) is a link which opens a pop-up window with a tiling (table above) or a big sample of the pattern (drawings below).
On the graphics, in grey, the small polygons show the rotation's centers and orders, the full/dashed lines are the axes of the pure/glide reflections. In blue, a base of the lattice; in green, a generator set of the group.

The method and the new results presented on this page are widely inspired from a research work by a dear friend, Georges Lion (1936-2014):
DISCRETE GROUPS OF PLANE ISOMETRIES - A new classification and their representations as Wallpaper groups. (Georges Lion, 2010)

Evgraf S. Fedorov described the 17 groups in 1891.
The Egyptian artists knew 12 of these types of pavings; the five missing groups are those which exhibit 3-fold symmetry.
Examples of 13 of these 17 types of paving appear on the mosaics of the Alhambra palace in Spain, near Granada (architecture of the Islamic Middle Ages where animal and human patterns where forbidden); the four missing groups are g-, c2+, g²+ and a³.
There are also many examples of paving with figurative drawings in Maurits Cornelis Escher's work.

Concerning the isohedral  or tile-transitive  tilings (for each pair of tiles there is an isometry in the group which sends one onto the other, the tiles are thus all identical), it's only in 1968 that H. Heesch described 28 types of tiles which pave the plane. This result, "forgotten" during about half a century, has been "cleaned" by John Conway and Xavier Hubaut (see last reference): the 28 types have been reduced to 19 because somes types are particular cases of others. For 15 of the 17 groups only one type of tile is associated to the group, and for each of the two groups with only glide reflections there are two.
You may view examples of tilings in the pop-up windows accessible from the table (a marked tile is necessary for a³).

the tilings with polygons

Which polygons tile the plane? All the triangles, the quadrilaterals (except the crossed), three families of hexagons, but also some types of convex pentagons. A fifteenth type of pentagon (bottom right) has just been discovered (August 2015); are there others? No! (Michael Rao - ENS Lyon, France - August 2017)
Only the fourteenth is unique (up to similarity); the others belong to families (at least one parameter).
With polygons with seven or more sides it's impossible. 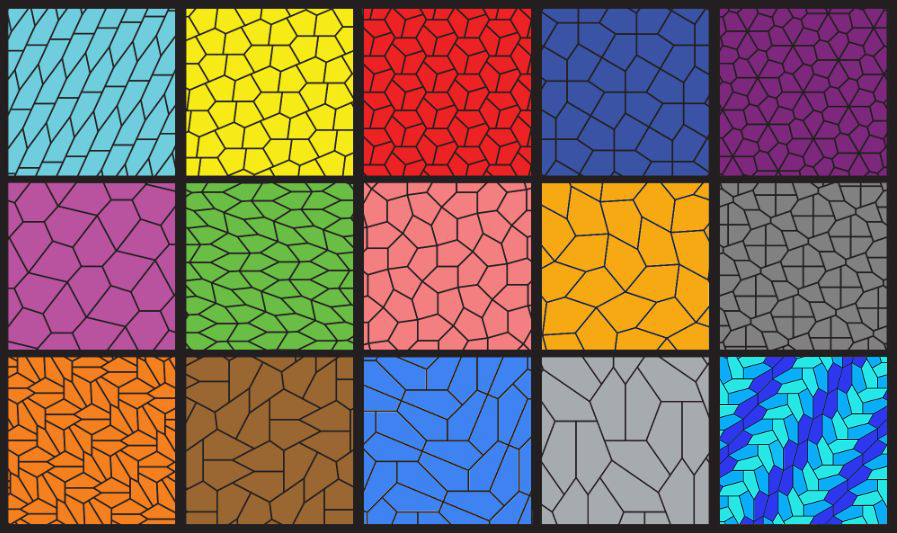